[Translated from the original Japanese]

Thomas M. Siebel is founder, chairman and CEO of the U.S. AI company, C3.ai. He turned from Oracle executive to an entrepreneur. He established the software company Siebel Systems in 1993, and sold it to Oracle in 2006. In 2009, C3.ai was launched.

A billionaire tech entrepreneur working in Silicon Valley, Siebel published a bestseller last year, Digital Transformation: Survive and Thrive in an Era of Mass Extinction, and today talks about corporate survival strategies in the digital age. 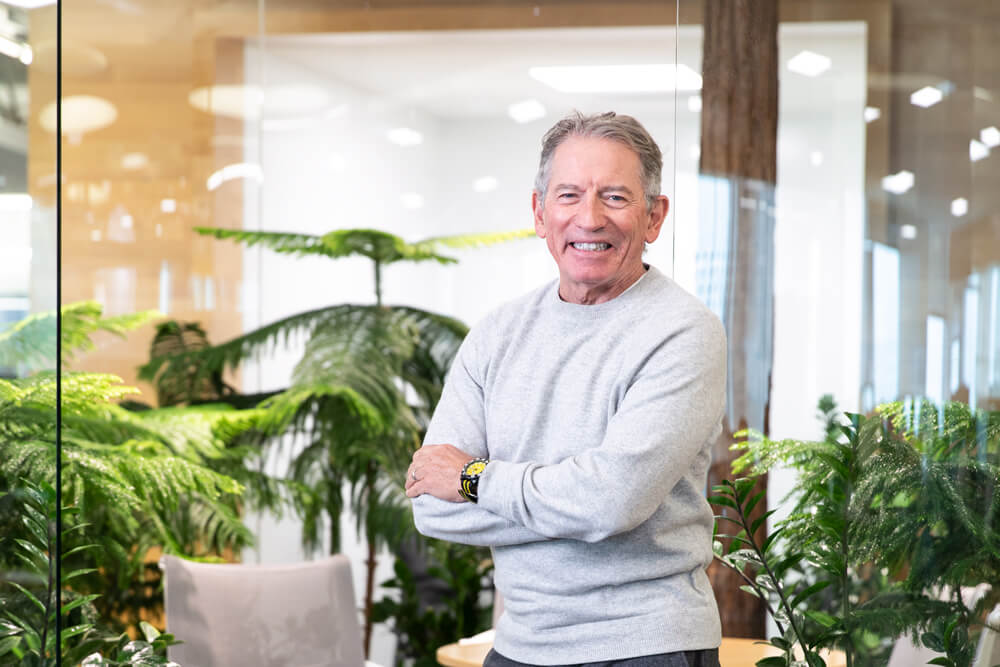 Interviewer: You have been watching the rise and fall of technology in California since the 1980s. Please tell us why you think the “era of mass extinction” has arrived.

Tom Siebel: In the information technology (IT) industry, there have been a number of truly important changes, starting with transistors, semiconductors, minicomputers, personal computers, and the Internet. I have 40 years of experience in the industry. In the 1980s, the global market was worth about $50 billion. That is now $3.5 trillion. It will be $9 trillion within five years.

The driving force is elastic cloud computing (of virtual server services) and big data, the Internet of Things (IoT), and artificial intelligence (AI). Over the past decade, companies have dramatically changed the way they think about IT.

In the 1980s and 1990s, the chief information officer (CIO) was responsible for IT system purchasing decisions, but now the CEO is in charge of “digital transformation.” No matter where you go, in any country, the CEO will make these decisions.

Today, companies are disappearing at an unprecedented pace. In the last 19 years, 52% of Fortune 500 companies have disappeared due to bankruptcy, merger or restructuring. Both the collapse of Eastman Kodak and Toys R Us have shown that mass extinction is advancing.

I came to think of business cycles as being related to evolutionary biology. In light of evolutionary biology, “speciation,” in which an organism forms a new species through evolution, occurs through natural selection and “intermittent equilibrium”. The intermittent equilibrium was accompanied by mass extinctions, five times on Earth. Just as dinosaurs are culled and mammals fill the void, re-speciation occurs after mass extinction, creating new species with new DNA.

The business world is no different. Tesla, a US electric car maker; Uber, the largest ride-sharing company in the US; Airbnb, the largest private lodging agency; and Amazon.com. All are companies with a new kind of DNA, leveraging elastic cloud computing, big data, IoT, and AI to transform industries such as the automotive industry, passenger transportation, and retail, and filling the void of existing businesses that are disappearing.

CEOs need to know that if they don’t take advantage of new technology, their companies will either be gone or acquired. I wrote Digital Transformation to inform leaders about what’s going on in new technology and how important it is.

What is Digital Transformation? It’s not just digitization or automation.

Introducing AI is changing the way we design and manufacture products; provide services; provide customer service; and manage organizations. The government is no different. AI changes the way the US Army, Air Force, and Central Intelligence Agency (CIA) operate. AI enhances the quality of products and public services, and increases customer and consumer satisfaction.

I heard that you were influenced by the sociologist Daniel Bell’s book “The Coming of Post-Industrial Society” during your graduate school days. Professor Bell seems to have coined the term “post-industrial society,” but what aspects of the book affected you?

He has had a significant impact on my career. While studying computer science at graduate school, I came across The Coming of Post-Industrial Society (1973). Throughout my 40-year career, I’ve experienced the changes exactly as Bell envisioned.

He developed a really convincing argument. He predicted that the structure of the world economy would change, and that IT, data, and the accuracy and instantaneousness of data would change the way people work, communicate, and spend leisure time. As expected, IT changed everything. Emails have replaced letters. Although there was no Internet or mobile phone in 1973, Bell was a genius in foresight, anticipating that the nature of our work and relationships would change.

Today, that change is accelerating. What is happening in the AI world is the ultimate form of Bell’s vision. His argument was logical and inspiring, so I decided to spend my life working on it.

C3.ai is an AI software provider engaged in accelerating the digital transformation of companies. 3M, a major manufacturer of consumer and industrial products; Caterpillar, a US construction machinery company; and the US Air Force are a few of your customers. How has digital transformation been particularly successful?

3M and Caterpillar are using AI to “stochastically optimize” their supply chains. Think of it as a just-in-time system that supplies just the right amount of material when needed. It’s based on the same idea as the Kanban method for minimizing inventory.

In your book, you quote an analyst saying, “Investing in technology is not the same as digital transformation.” Why do you think it is not about changing IT technologies or improving business processes, but about changing the core of your company?

AI adoption will change the way we manage our supply chain and customer service, and the way we design products and improve the quality of those products at lower cost that benefit both businesses and customers. There is also a need to radically change management processes such as employee education.

Craftsmen were replaced by automated production lines and robots. As jobs changed, so did the skills and education required, and the ways in which employees were motivated.

A similar change is taking place as we move into the AI era. The tricky part is that change creates change management issues. In the Industrial Revolution, it took 200-250 years to get things working correctly, dealing with issues such as pollution.

Can you give us some examples of digital transformation failures?

A prime example is GE Digital’s Predix, a subsidiary of General Electric (GE). GE tried to transform the world with Predix, but it was complete failure.

Many organizations are spending enormous amounts of money to build a custom AI platform and attempt digital transformation, and failing. If you fail to build your own system, you will always use the services of a specialized company such as C3.ai.

In your book, you list ten actions as part of a CEO Action Plan. What is the most important thing when it comes to digital transformation?

In a company where digital transformation is a success, the CEO is responsible for driving the change, providing leadership, and giving orders. First, structure your organization, budget, set up trackable projects, determine a short timeframe, such as six months or one year, and seek results.

The measure of the success of a change directly correlates to the “economic benefit” of the project. How much revenue has increased, how much customer satisfaction has gone up, and how much product quality has improved. These are key.

C3.ai announced in June 2019 that it would refund its employees for a master’s degree in computer science at the University of Illinois at Urbana-Champaign.

Many C3.ai employees, including those in the US, Europe and Asia, are from top schools such as the Massachusetts Institute of Technology (MIT), Harvard University, and the University of Tokyo. Nevertheless, to continue to be successful in this industry, we need to constantly retrain our employees.

When new types of talent are needed, companies have two paths: fire and recruit others or retrain your current employees. Future leaders will be successful in the 21st century economy by doing the latter. C3.ai believes in on-going education and rewards employees for accomplishing it.

Now you can learn about AI, machine learning, big data, and digital transformation online. We not only encourage employees to take courses on Coursera, an online learning platform, and obtain a certificate of completion – we also pay them to do it.

C3.ai is a relatively small company, with 500 employees, but everyone is studying at Coursera. So far, we have paid millions of dollars in rewards. At our headquarters in Redwood City, Calif., there is a “Hall of Fame” corner with names of those who have completed online courses. Candidates for a master’s degree in computer science will have their tuition and fees covered and will also receive a $25,000 bonus, 15% raise, and stock grants upon graduation. Currently, 16 employees are studying for a degree.

As you continue to learn, your knowledge and abilities will increase, and your satisfaction and productivity will grow. It has a positive impact on life, and it is good for companies and customers. Companies focused on enhancing their skills will survive the 21st century and continue to thrive.

You are now 67, but in 2009, you suffered major accident while on safari in Tanzania, in which you almost lost your leg.

What doesn’t kill us makes us stronger. I was seriously injured (attacked by an elephant) and underwent 19 reconstructive surgeries. I spent more than a year in a wheelchair, and many years rehabilitating. Today, I am in good shape.

I wake up at 5 in the morning and work 13-14 hours. I work on challenging projects to solve problems that previously could not be solved without AI, and I have the opportunity to work with talented employees from Europe, the United States and Asia, and with successful clients.

What would be your one message to the Japanese CEO working to implement digital transformation?

First, I would suggest they read a few books. Other than my book, Pedro Domingos’ The Master Algorithm and Kai Fu Lee’s AI Superpowers.

Be the CEO who breaks customs. You need to transform your business with strong leadership and lead the industry, then other companies should follow.