Petroleum Economist CEO of the year Lorenzo Simonelli has navigated Baker Hughes through one of the most transformational periods in its 112-year history. It recently emerged from a brief spell as a GE company as a thoroughly modern ‘energy technology company’, positioned for the energy transition and starting to post some impressive numbers.

GE announced in October 2016 it was to acquire Baker Hughes Inc. and integrate it with GE Oil & Gas to form a single player, Baker Hughes, a GE company. The transaction closed in July 2017, but the original arrangement was to be very short-lived; in November 2017 GE announced it would exit its financial position in the combined business in an orderly fashion. The combined business remains intact, but GE has since deconsolidated the business and retains only a 36.8pc share of its ownership, which it has committed to winding down to zero.

Simonelli has been president and CEO since the company’s creation in July 2017. For GE, 2017 marked the beginning of a turbulent period. Its stock ended the year down 45pc, before halving again during 2018. GE no longer saw Baker Hughes as a strategic investment and decided to sell it to raise capital.

It was not the construct of the deal that prompted GE’s exit, rather the need to monetize the investment to pay down debt and concentrate on other interests. Baker Hughes’ self-contained but diversified nature made it an obvious candidate.

Baker Hughes has four major business lines. Oilfield services is predominantly made up of the pre-GE Baker Hughes Inc. and includes a variety of services such as drilling services, wireline, artificial lift and chemicals that compete with Halliburton and Schlumberger. It makes up the bulk of the company’s business.

The oilfield equipment business—which includes subsea and deep-water production systems, flexibles and manifolds—came from GE Oil & Gas and competes against sub-sea players such as TechnipFMC, Aker and Schlumberger’s Cameron International.

Lastly, the digital solutions business—which participates in oil and gas and other industries—includes sensors, measurement, inspection and data collection.

So is the new Baker Hughes, arrived at through a combination of design and providence, now of the correct size and contain the ideal blend of assets? “There is a lot that we can do organically with our portfolio,” says Simonelli. “The first focus for us is continuing the integration, continuing the operational execution and improvements, and organically growing some of our product capabilities.”

Its portfolio of business lines means it can be somewhat agnostic about the direction of the energy transition while avoiding being swept along by the cyclicality of “swinging up and down with the price of oil,” he says. “We love to have diversity within the company.”

That said, Simonelli has a clear strategic direction regarding the transition. “Over the course of the next decade, gas will be a winner—if you look at energy consumption continuing to increase, the abundance of gas and [growth of demand for] LNG.”

The slant to gas fits with the company’s strategy for the energy transition.

To take a leading role in the transition, says Simonelli, companies need to demonstrate a technology is reliable and less expensive than existing arrangements. “If you take on the narrative of the carbon footprint and show you are conscious about the impact of climate change, you need to address it upfront and show how you are improving your carbon footprint.

While the hardware is important, and is already in place, the true value lies in how it is utilized. “It is the artificial intelligence (AI) and predictive analytics that take place afterwards that is going to be key.” It has a partnership with C3.ai for AI “which allows us to get to the algorithms that are truly predictive”.

Earlier this year, Baker Hughes formed an alliance with C3.ai—founded by Tom Siebel, the creator of Siebel Systems (now Oracle Siebel), a well-known customer relationship management (CRM) provider. C3 has worked on projects for Enel, Shell and the US Air Force. “C3.ai has shown some true applications of AI. With the partnership, we use AI internally to better drive productivity improvements as well as introduce it to oil and gas customers globally,” he says. “We are at the early stages of a transformation within the industry.”

The focus on AI is already impacting the industry’s culture—with data scientists recruited from Silicon Valley firms—although there will always be a need for the “capability to understand oilfield operation,” he says. “We see it happening today. For example, with Equinor, in offshore drilling we have shown the relationship between data-driven insights and remote operations, the ability to drill a perfect well with more remote engagement. We are going to have to reposition people into new skill sets—it is more a reskilling and re-concentration of individuals than a de-manning exercise. We have a duty to enable the workforce.”

Simonelli says Baker Hughes’ approach is based on the idea that “you need an ecosystem”. It offers a C3.ai platform of AI that can be hosted on an Amazon Web Services or Microsoft Azure cloud, or on the customer’s premises. “Customers create their own applications and other players come in and sit in the same ecosystem. We are moving towards a world that is more conducive to partnering and working together for an outcome. We will continue to play a key role where we have competence, domain experience and equipment.”

This increasing interconnectedness poses the question of where value is created and can be captured. “Being in the middle [is ideal]. Understanding the pain points of customers and providing at an open architecture to which people can add their own applications,” says Simonelli, describing something akin to Apple’s App Store for industrial AI. “That is more sustainable than trying to be everything to everybody. There is always going to be something new, and new things to think about. It is better to go in with an open mind than restrict people from playing on your platform.”

AI has become a central theme of the industry and this is set to long continue. “We are really at the early stages, if you look at the data captured and used,” he says. Data capture within the industry is of a scale that very few industries achieve but according to a recent study it only utilizes 3pc of it to make informed decisions. “We need to move towards even more different types of AI and mass computers to drive increased productivity. The use of big data analytics will drive the next aspect of productivity.” 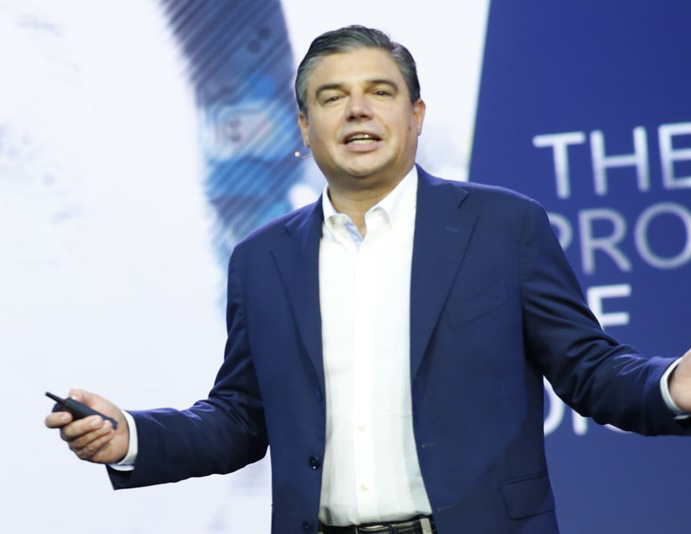